From the magical Silk Road cities of Samarkand, Bukhara and Tashkent

The History of Suzanis

A suzani is a large, hand-embroidered textile panel, originating from nomadic tribes in central Asia principally Uzbekistan. Suzanis have become highly collectable and valued for their beautiful decoration and fine craftsmanship. The word suzani comes from the Persian word suzan, which means needle.

The primary use of a suzani was within the yurt (a Central Asian nomadic tent), as a protective wrapping panel for textiles and belongings. They were also used as prayer mats, as bed sheets and for seating — pieces of furniture are seldom found in yurts, because they are cumbersome to move.

Suzanis had a symbolic significance, too. They were traditionally made by brides and their mothers as part of a dowry and presented to the groom on his wedding day. They represented the binding together of two families, and were adorned with symbols of luck, health, long life and fertility. Such as the sun and moon, flowers and creepers of the Asian steppes, leaves and vines, fruits (especially pomegranates), and occasionally fish and birds.

Hand-woven fabrics are used for the embroidery foundation cloth. These fabrics are woven in narrow strips 50cm wide. Most current-day pieces are a silk/cotton blend: a silk warp is most usual, with cotton wefts. The fabrics are often lightly dyed to produce a soft beige tint–a so-called “tea wash.” For pieces designed for harder for example horse cloths the ground fabrics are all cotton.

Several of the fabric strips are first sewn loosely together and the pattern is drawn on them; then they are taken apart so that two or more family members or friends can work on the embroidery simultaneously on narrow portable frames. On the best quality suzanis when the panels are rejoined, the patterns are sewn over the seams to create the illusion that they were embroidered on one piece of cloth.

Just four stitches — tambour, basma, chain and kanda-khayol — are used to realise a large variety of patterns. These motifs were believed to imbue the suzanis with spiritual powers, offering protection or strength to their owners.

The silk embroidery threads are traditionally coloured with vegetal dyes. The natural dyes use imported indigo for blue, cochineal and imported madder for reds, saffron for yellow, a mix of indigo and a yellow tree fungus for green, and iron oxide and pistachio nuts for black. The dyeing process takes place in an outdoor vat.

During the time of the USSR the particular ethnic skills of the member states were ruthlessly supressed but when Uzbekistan once again became a country in 1991 the traditional skills were actively promoted and reborn.

All the silks used in these textiles use dyes made from completely natural resources such as plants, seeds, roots and earths.

Consequently, the colours have all the richness and intensity of nature. 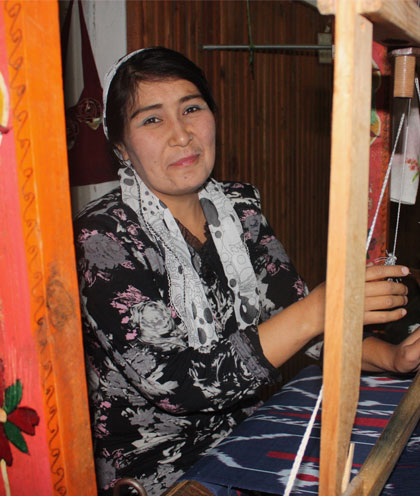 An Uzbeki craftswoman working on our products thus providing a source of income to the talented women of the region.

The Suzanis sold by Stepping Stones Collections are sourced directly from a workshop in Bukhara. The base cloths and silk embroidery threads are made and dyed in the traditional manner.

Suzanis are far more robust than their intricacy and beauty would indicate. They can be used as table coverings, upholstery pieces, bed covers, window blinds and seat cushions: just to name a few! 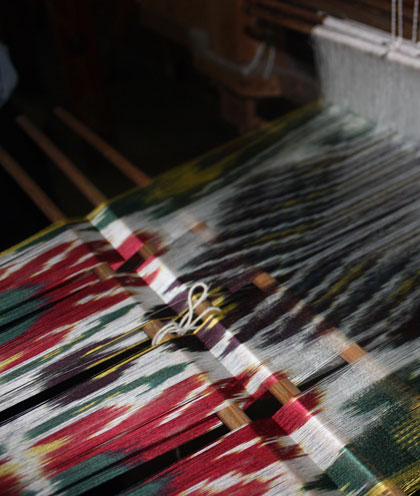 The intircate weaving techniques used to produce the wonderful ikat fabrics of the Ferghana valley.

The Suzanis sold by Stepping Stones Collections are sourced directly from a workshop in Bukhara. The base cloths and silk embroidery threads are made and dyed in the traditional manner.

Suzanis are far more robust than their intricacy and beauty would indicate. They can be used as table coverings, upholstery pieces, bed covers, window blinds and seat cushions: just to name a few!